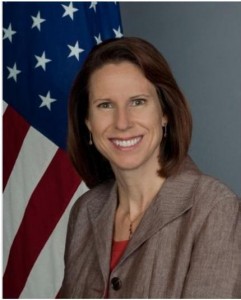 US Ambassador to Mongolia Piper Campbell

In this interview, Ambassador Campbell speaks to U.S. programs in Mongolia that encourage the greater participation of women in leadership and public policy.  She also provides valuable advice to those of us working to support the full inclusion of women public affairs and governance.

We would like to thank U.S. Ambassador Campbell for sharing her experience, reflections and advice with the WIPA community.

What programs does the US Embassy in Mongolia support that promote the inclusion of women in governance or leadership?  What are some of the gender equity roadblocks that women face in Mongolia?

The embassy has a number of programs that seek to help develop leadership and academic potential in young and mid-career professionals.  Many of them do not focus specifically on women, but historically, Embassy Ulaanbaatar sends more women than men on these programs.  These include the Fulbright and Humphrey exchange programs.  In the last two years, all of our Humphrey program participants have been women, and 40 of 78 Fulbright participants have been women.

One program designed specifically for women is the Study of the U.S. – Summer Institutes program for Women Student Leaders.  We sent five female university students to this program last year, and we plan to send four this year.

The good news is women in Mongolia are very active in business and government.  I have been impressed by the energy and commitment of the female members of Parliament (and female Ministers) and note that Mongolia has more female representation in your legislature than many other countries do.  I think everybody would still like to see more women reach the highest levels.

As Secretary Clinton said when speaking at an International Women’s Leadership forum here in Ulaanbaatar in July, if there is one characteristic that every strong democracy in the world shares, it is that they are fully open to all of their citizens – men and women – and a democracy without the participation of women is a contradiction in terms. So whenever we talk about how to support democracy, we must be sure that women are not just a part of the discussion, but at the table to help lead that discussion, and to remain committed to helping more women worldwide gain roles in their governments, their economies, and their civil societies.

Did female mentors or role models play a significant role in your professional development? If so, how?

In August, when I was sworn in as U.S. Ambassador to Mongolia, I spoke about how important my mentors, both male and female, have been to me throughout my diplomatic career.  I was lucky enough to work with the woman who is now Director General of the State Department, Ambassador Linda Thomas-Greenfield, in Geneva many years ago.  Linda showed me the importance of letting your own personality shine through – being empathetic and honest.

I want to note also the important support I got from male mentors, some of whom pushed me to be more ambitious in my goals than I might otherwise have been.  I remember then-US Permanent Representative to the United Nations Richard Holbrooke sending me alone into an important meeting with non-governmental organizations.  His confidence in my abilities challenged me and helped me to grow professionally.

One of my favorite State Department ceremonies is the International Women of Courage awards, which is held each spring.   The awardees are women who have been working tirelessly to improve the lives of women and girl.  In many cases, they have faced incredible personal challenges.  This ceremony reminds me that advocating on behalf of women often is not easy, but, my gosh, it is so important.  Secretary Clinton often says that advocating on behalf of women isn’t just the right thing to do; it is also the smart thing to do.   Improving the lives of women improves the lives of their families, strengthens their communities, and creates more opportunities for economic growth and prosperity.

In an online article, you are quoted as saying that your time spent in Japan inspired you to go into the diplomatic service.   Can you expand on that and what specifically encouraged you to pursue this career?

Participating in a student exchange to Japan exposed me to a new culture and language and gave me an opportunity to forge important friendships.  Really, I think that I never looked back after that exchange:  I wanted to see more places and learn more about this amazing world.  I attended a university with a strong focus on international relations and joined the foreign service almost immediately after graduation.

You have achieved remarkable milestones your career.  What advice would you give to young women who are pursuing public service careers and interested in leadership?

My primary career advice is to pursue your passions.  People excel when they are doing things that interest them: they are more inclined to do outside research to get really smart on the topic, they bring energy to their job, and their enthusiasm is noticeable and contagious.  Someone becomes a leader by having vision, but also by being willing to do the work.  I firmly believe that the best way to motivate is by showing your own enthusiasm for what you are doing.

From June 2011-June 2012, Ms. Campbell served as the senior civilian representative of the U.S. government in southern Iraq, opening Consulate General Basrah on July 5, 2011. Prior to her assignment to Basrah, Ms. Campbell worked as Chief of Staff to the first-ever Deputy Secretary of State for Management and Resources (current White House Chief of Staff Jacob J. Lew), as well as to the current Deputy Secretary, Thomas R. Nides.

Ms. Campbell joined the Foreign Service in 1989 and began her diplomatic career as a consular and administrative officer in Manila, the Philippines, and then as a general services officer providing support to the three U.S. missions in Brussels, Belgium (Embassy Brussels, USEU, and USNATO). She went on to serve in the State Department’s Operation Center (1994-1995) and the Bureau of International Organization Affairs (1995-1996) before being seconded to the civil affairs section of a United Nations peacekeeping mission (1996-1998). Ms. Campbell then opened an office of the U.S. Agency for International Development (USAID) in Eastern Slavonia, Croatia.

A native of Buffalo, N.Y. and resident of the District of Columbia, Ms. Campbell holds a Bachelor’s degree from Georgetown University’s School of Foreign Service and a Master’s degree from the Harvard Kennedy School.