What I am hoping this post will do is start a discussion on the complex position of women in revolution & conflict, specifically what the moniker of “victim” and what it implies.  Finally, what are the implications of this on bringing change to the local- and international-level policy?

In this post I will argue that the cultural bias towards those groups that we label “vulnerable” populations may inadvertently increase our threshold for human rights violations towards groups who lack this moniker. 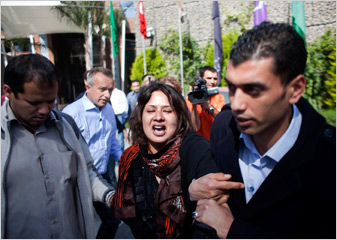 Photo from the NYTs

This post was prompted by an article I saw on the NYTs this morning about Eman al-Obeidy [or Iman al-Obeidi], a woman from the area surrounding Benghazi who was kidnapped by forces loyal to Qaddafi where she was beaten and raped by 15 men over a two day period.  Ms. al-Obeidy managed to escape and fight her way into the Rixos Hotel, where foreign journalists invited by Qaddafi are staying.  The article provides a harrowing account of her hour with the journalists and video on the Telegraph UK website shows Qaddafi’s security forces dragging her away.

This horrific story is very likely to provoke a strong backlash in the media and the national dialogue about the extent of the international community’s role in this ongoing civil war.  This is necessary and long over due, however it is beyond unfortunate that the torture of Ms. al-Obeidy and her successive bravery is what is necessary to ignite strong change.

Previous posts on this blog clearly show that women are not merely relegated to the role of victim in revolution [see my posts on the revolution in Egypt and Sudan's recent elections].  However, it strikes me with some sadness that the public’s shock and horror towards extreme victimhood in what we label vulnerable populations may prompt faster more drastic responses from the international community.

Victimhood in women has been something that the international community has worked for years to eradicate.  The MDGs are heavily focused towards empowering women to promote equality and poverty reduction.  While it is true that studies have shown that gender equality reduces poverty, I wonder if some gender equality policy is more driven by our adversity towards the idea of women as victims.  We collectively label women as vulnerable groups [which in many places and contexts around the world they legitimately are].   However by doing so we give tacit approval to the idea that other groups are less so.  While I strongly agree in supporting these goals and am a fervent supporter of ensuring equal opportunity for women I wonder if by embracing this narrative do we become more accepting of or desensitized to human right’s violations towards other segments of the population, i.e. men?

Take for example, the subject of this article – Libya.  While Libya has ironically been a member of the UN Human Rights council it has repeatedly been accused of human rights violations.  In February of this year the UN decided to probe reported human rights violations only after hundreds of people had been killed in peaceful protests.  The question that arises is, do large swaths of the population, which include women, need to be killed or threatened before this prompts swift, coordinated international action?  Is our collective threshold for human rights violations, atrocities committed towards women?

This prompts me to consider another infamous case of victimhood — the torture of prisoners at Abu Ghraib.  In this case the victims were men and the perpetrators were male and female soldiers.  The international community was outraged by the torture inflicted on the men held at Abu Ghraib but there was also extreme horror and fascination that a woman, Lynndie England, could participate in and inflict such degradation.  In many ways Ms. England, rather than the men who had been tortured, became the symbol of this abuse and the evils that war could inflict on the human psyche. Was this because she had accepted a role that was in complete rejection of the cultural bias that sees women as the victim?

Is this perhaps why, as a global community, we react so strongly to a woman who leads the charge in support of revolution?  When a woman leads the call to arms are we more shocked or inspired because she is a woman?  Do we listen more and is that a bad thing?  Finally, would the subsequent coverage to come of Ms. al-Obeidy be as strong if she were a man?

These questions are not intended to delegitimize the atrocities committed against Ms. al-Obeidey or undermine the international community’s response to Ms. al-Obeidey’s bravery; I merely want to caution that we should not allow ourselves to become desensitized or hardened to the sufferings of other segments of the population who are not labeled “vulnerable.”  This is a challenge in a world where everyday we have to make choices about what is featured on the news, what receives our attention, which cause we choose to support and which issue we choose to rally behind.  Nevertheless, it should be something we are aware of.  As future policy makers we should ask ourselves, “By acknowledging a particular issue, what are we choosing to give up and what will be the impact of this choice?”  Unfortunately policy making often boils down to making choices between issues and the trade-offs between the two.  I hope that as we move into positions of leadership we can respond to civil war or violent conflict because we reject victimization outright, regardless of who it is perpetuated against.